Hello, I am Bridgette Reuvers-Slinger, a student from Hamline University, majoring in Anthropology and minoring in Sociology. I have been interning at the Rice County Historical Society for about two and a half weeks now. Sue Garwood has asked me to help out with a display that they have that she feels is not up to speed. This has become my daily project.

The collection at hand is a set of archaic stone tools that were donated in the 1930s that were not cataloged and very little was known about the tools. I am in the process of cleaning old museum wax off of the tools, putting new accession numbers on each tool, measuring and documenting them, and writing descriptions about each individual tool. The descriptions that I have been writing include things such as potential names and how they were made. I have also spent a lot of time reading and researching not only the time periods but also the material of the tools.

One of the neat things that I have encountered thus far is one of the tools that I had initially thought was used for animal hide scraping. I had thought this because of the shape of the tool and the way that it compared to the other tools. After some more investigating and research I realized that the tool was not only categorized in the wrong time period but that it was not a scraping tool at all. After my research, I determined it to be a knife from an earlier time period. Thus far I have found three more tools that were incorrectly categorized as far as time periods. I have been using the physical evidence of the tools to try and decipher the time period. There are many books that are available that have visual representations of the tools that I have used for comparisons. 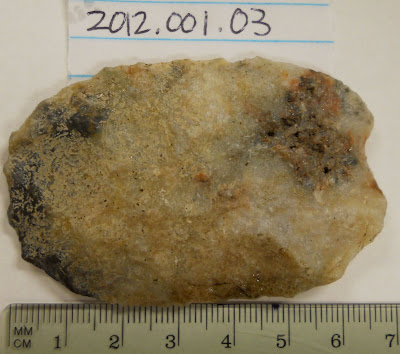 My end goal is to have the exhibit completely re-designed by the end of the month. One of the modifications includes a new way to display the tools in the collection. Perhaps instead of setting it up chronologically it would be more visually appealing to display the tools by the function. With some volunteer and staff assistance, I have already taken the background fabric off of the display and replaced it with new clean fabric. Soon I will start to write draft exhibit labels that will accompany the display.
Posted by Rice County Historical Society at 9:08 AM