Brian Schmidt became connected to the Rice County Historical Society through his passion for collecting artifacts from the former Fleckenstein Brewery. After getting to know the staff at the RCHS Museum, Schmidt decided he wanted to be part of “a wonderful group of people that likes to preserve the history of Faribault and Rice County.” 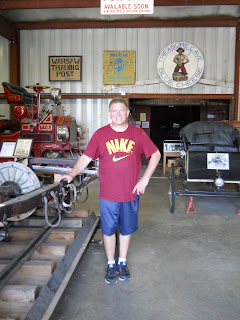 Schmidt, who lives in Faribault, has been a volunteer for the past three years. He gives of his time as a member of the collections committee, fair committee, buildings and grounds committee, and helps in any other way he can such as hanging signs in Heritage Hall prior to the 2012 Rice County Fair.

For just over 20 years, he has worked for MOM Brands (Malt-O-Meal). He also worked at the former Treasure Cave blue cheese factory in Faribault for 11 years and for the United States Postal Service for one year. During his high school years, he worked for Larry Bhur at Sears (where Napa is located today).

Schmidt was born in San Jose, Calif., in 1962, and moved to Faribault in the early 1970s with his family. Today he is married with a house in Faribault, and he and wife, Toni, have two sons, Derek and Jarid.

His main hobby is learning as much as he can about Fleckenstein Brewery and collecting artifacts from that former Faribault business. He also likes to fish, travel, browse at garage sales, and learn new historic facts about Faribault and Rice County.
Posted by Rice County Historical Society at 8:21 AM

Email ThisBlogThis!Share to TwitterShare to FacebookShare to Pinterest
Labels: Volunteers